Elijah picked us up at the airport when we landed in Hoedspruit. We were on our way to Ngala Safari Lodge. I quivered with excitement. It was an hour-long ride and I hovered over his shoulder talking non-stop. I asked him,

“What was the dumbest question a guest has ever asked you?” Elijah was silent for two beats longer than I expected. “I will have to think about that question, Mrs. Klenk. I will tell you when I know.”

My new friendship with Elijah was an unexpected bonus to Paul. Thankful someone else had to listen to me prattle, his head lolled on the back of his seat and his snores were embarrassing.  He missed the warthogs and giraffe I saw by the side of the road, and he did not believe me when I told him there was elephant poop as large as a Thanksgiving turkey and an antelope the size of poodle—one of the miniature ones. 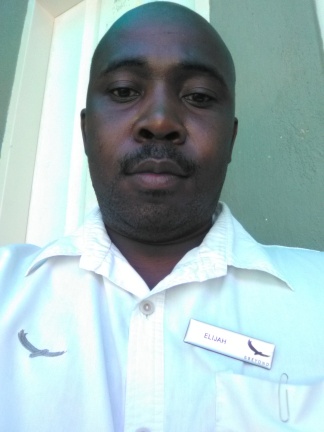 Poor Elijah. by the end of our stay in Ngala, not only did he have a question for me, he had an entire story by which he could have lost his job and we could have been kicked out of the lodge. But for the kindness of Mamma Connie—and mostly the Black Dame—we were forgiven.

I want to be totally up front with this story. It was Paul’s fault. From the beginning, the middle, and all the way to the end, it was Paul’s enthusiasm that got us in a serious pickle.

I had read in some of the safari materials that guests could visit a local community, talk to teachers and students, and listen to a talk about a compassion care clinic. Sign me up. That’s right down my alley. I dressed carefully, covering my legs with a long skirt in case there were local beliefs that women should dress conservatively. The only problem was that it was hot.

“Elijah, can I open the window?”

Elijah was our driver for the afternoon. The car was a late-model SUV—very comfortable. The body of the car was gleaming from a recent washing and even the tires were scrubbed free of mud. The kitchen staff had made lunches for all of us and thoughtfully remembered extra water bottles for when we walked in the community under the strong sun.

“Yes, Mrs. Klenk. I will also make the air colder.”

“Elijah,” Paul said leaning forward into the front seat, “have you seen the Big 5?”

“Mr. Klenk, I have not. I have only been here two months and I have not been on safari. I have just the leopard left. I have seen the others, even the lion, near the lodge.” Elijah spoke carefully and there were times his speech was so formal it made me smile.

This is where we went wildly off track—or others may call it, gone rogue.

“I know where a leopard is,” Paul said. My husband had memorized the roads on the reserve and he recognized we were close to the location where we had encountered a leopard that morning. We were driving on the road that skirted the edge of the reserve property. The safari roads were just on the other side of a stand of brush that grew haphazardly like an inconsequential fence—more bluster than real. Elijah’s foot hesitated over the brake. He looked at us in the rear view mirror. We looked innocently back. That is how Paul and I get in trouble. It always seems like a good idea.

“Elijah, don’t worry. She is very close to here. She is in a tree. Paul pointed through the open window past my hair blowing in the hot wind. “Turn here. It will be just a small detour. I promise.” I wondered if Elijah knew the English word “detour.” It was kind of an old-fashioned term. Elijah slowed the vehicle to a crawl and looked a bit concerned when Paul pointed to a small opening in the brush. He turned slowly.

“Good, yes, Elijah. I know exactly where she is. Allyn and the other guides call her the Black Dame.” Elijah brought the car to a halt. He stared at us in the mirror.

“Yes, I know of the Black Dame. I have heard of her. I think it is best that we turn around now. This is not a safari vehicle. It should not be here on these roads.”

“Elijah,” Paul wheedled (yes, he did wheedle), “see that tree up there? You can see her tail hanging down. Just pull onto that path and you will see her.” Paul spoke with confidence. “You will have the Big 5, Elijah. Just two months here and you will already have the Big 5. I’m impressed.”

Elijah edged forward and pulled up next to the tree where the Black Dame was sleeping. Her large, muscled body rippled as she turned and raised her head. She opened her beautiful Cleopatra eyes and sat up. She yawned. Her mouth was huge. Her teeth were daggers. In that moment I realized she was a serious predator. I probably weighed more than an impala, but I think she could take me if she put her mind to it. 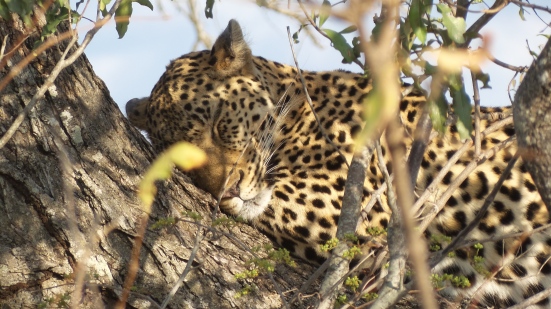 “I think we should leave, Elijah,” I said. I started to close my window. Paul grabbed my fingers and the glass paused.

“Just a minute.” He leaned across my lap and stuck his head out the window. The big cat tensed and stared down at us. Both Elijah and I struggled to close the window. I grabbed Paul’s head and hauled him back in the car. The Black Dame’s front claws extended onto the branch she was sitting on. Her haunches were in the air. Elijah put the car in reverse and we took off out of the clearing like we were in a safari vehicle. The dust rose around us and I thought of the wasted washing the car had received.

“We are going to the community now. We are only going to that location. We will stay on this road.” Elijah’s arms were straight like he was trying to push the steering wheel away from him. He wiped his brow.

“Elijah, I am so sorry. We didn’t realize she would wake up.” I tried to be conciliatory, but what I really felt was tremendous guilt. “We will tell Mamma Connie what happened.”

“It’s okay, Elijah. I will tell her it was all my idea. That I made you do it.” Paul was serious.

Elijah was silent. The inside of the car was freezing.

“You tell Mamma Connie what happened and then I will talk to her when she comes to speak to me,” he said.

“Could you lose your job?” Paul asked. Elijah didn’t speak.

“This is all your fault, Paul. For once I am not to blame. You had to pretend you were a safari guide and now we are all in trouble.” I shivered. It was cold in the car.

Then we turned the corner and two huge elephants were standing in the road. They were so close I could see their eye lashes. Paul and I didn’t hesitate. We both rolled our windows down to look at the elephants eye to eye.

“Mr. and Mrs. Klenk. It is time to go to the lodge. The windows must remain up. We will not stop again.” Elijah looked at us in the rear view mirror and we looked down in shame.

At the end of the week, Elijah drove us back to the airport. Since Mamma Connie had forgiven us, our little safari adventure was now funny.

“Mrs. Klenk, I have thought about your question since you have arrived. I have an answer. Everyone asks me who my partner is because all the other staff have partners (people they work with). I do not have a partner, but I have seen the Big 5.”

I burst into laughter. I hugged his shoulder.

“Elijah, give me your email address and I will send you the article about our trip to see the Black Dame.”

I wish I was there to see his eyes crinkle. He has been there more than two months now. I bet he has a partner and I am sure he has been on safari.

Full disclosure: I might have exaggerated a tiny bit about the Black Dame’s interest in us when we were in the car. Okay. Maybe. Also, Paul swears I did not have to “haul his head in the window.” Well, that’s still under debate. The most important part was that Elijah was a brave driver–especially because he had no idea how much trouble the Klenks get into on a regular basis. THANK YOU, ELIJAH.

Where Have We Been?