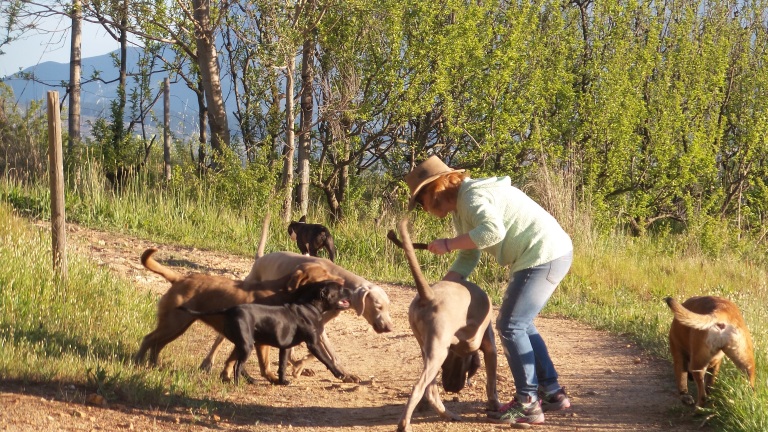 “Paaauull,” I said hugging him from behind. “I could call the airlines and find out how much it would cost to change our tickets to go home early.” I waited to see how he reacted.  He didn’t turn to look at me. I knew he wouldn’t. One of us has to be firm. In our marriage, it is him.

“No, let’s just go into town today and you can go shopping. You’ll feel better.” He’d probably calculated the difference between a shopping spree and the cost of changing a ticket. “What are you missing most?”

Why did he even ask? “Tucker,” I said walking away. Our dog.

We’ve adopted a dog who lives here on the winery grounds. We call her “Girl.” She’s sort of a Bull Dog/Lab mix with deep brown eyes and a short-haired brown body. She visits us at breakfast on the patio each morning and waits at the cottage steps to see if we will take her on walks. Of course we do.

The winery owner tried to tell us her real name, but we interrupted him and said, “Don’t tell us. We call her Girl and she seems fine with it.”

We set out tonight on our second walk of the day. On our other walks, we discovered porcupine quills scattered in the rows of grape vines. It had become a contest between us to see who could retrieve the most quills to put in our new safari hats. 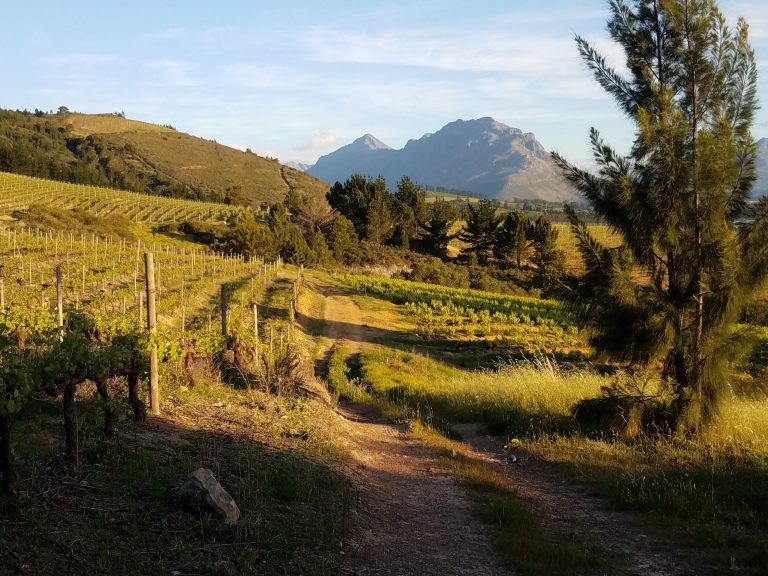 In addition to Girl, five other dogs joined us for our night’s ramble: one brown, happy Lab, two compact and determined black and brown Boston terriers, and two clumsy, grey, floppy-eared Weimaraners. The dogs dashed ahead of us, crossing the path back and forth. There was no clear leader, but Girl hung back staying close to us.

Paul was happy. The last time he walked with dogs was back in Minnesota hunting pheasants. He called out to them, “Get a bird, get a bird. Hunt them up, hunt them up.”

The dogs looked back at us. There was a tilt to their heads that was a bit disturbing. The Boston terriers cocked their heads sideways and, in both of them, one ear up stood up and one flopped down. The Lab wagged his tail smiling, and the two floppy-eared dogs stumbled around on their wobbly legs. Girl stopped. She sat. She did not move.

All hell broke loose. The dogs jumped in the bushes, crashing through the blue salvia and wild rosemary. We heard the frantic beating of wings and scrabbling of canine claws digging into the rocky soil.

Paul and I looked at each other.

Five dogs trotted out of the scratchy green, the cross-eyed floppy-eared puppy triumphantly carrying a fat guinea hen. Her neck was broken and a trail of long, speckled black feathers fluttered to the ground. The dogs jostled one another, and the featherless breast began to tear. As the dogs tasted blood, they began to grab at one another’s mouths.

Girl stared. She stood up and began moving forward with her ears flattened.

“Out, out,” shouted Paul pushing them apart with his knees and slapping their haunches.

They scattered, tails beating hard, and took off up the path six across. Now they were a pack. Even Girl was one of them.

Paul held up the guinea hen. It swung from his fist, an electric blue ring circling its crooked neck.

For the next two kilometers—up and down hills, across vineyard rows, over rocks, and through stands of pine trees—Paul and I chased the scraggly, unorganized pack of out of shape winery dogs whose previous idea of bliss was scraps of French bread and brie cheese.

They finally slowed down at the top of the mountain. They all collapsed, their chests heaving. They threw their heads back in defiant glory, and slobber flew in strings from their mouths.

“Gross,” I called as it splatted against my bare legs. “Paul, do something. I don’t want to be responsible for them going rogue and chasing a porcupine.”

They stopped. Six sets of eyes looked at me. They rose as a group and loped off down the hill. Paul and I grabbed hands and began running after them.

“Count them,” Paul panted. “Make sure there are six.”

“One, two, three, four, five,” I squinted in the purple light. “Girl. Girl is the one missing. Paul, run. See if she is down there.” The dogs continued down the hill, their back feet comically landing before their front ones.

The dogs and Paul disappeared over the rise in the road. I was alone. I listened for Girl. Nothing. I didn’t hear any snuffling along the ground or rustling of stiff branches. I didn’t feel her presence. She wasn’t there.

“Come on. Come.” I could barely understand him.

“I’m not coming down there if Girl isn’t there. I’m staying here to look for her.” I had tears in my eyes. Paul appeared out of the darkness.

“She’s laying down there waiting. Laying there.”

Ashamed, I joined him on the path. “It probably would have been a good idea to learn her name,” I admitted.

“You think?” Paul was taking deep breaths trying to recover from hiking back up the hill to me.

“Paul, do you think sometime when we are really, really old and can’t travel any more we can get another dog?”

Paul bent over, his hands on his knees, porcupine quills jauntily sticking out of his sweaty leather hat.

Our beloved Tucker died a month after we returned from South Africa. I miss him every day. I hope he is in a place where he can run mountains like the ones in Stellenbosh with a group of goofy dogs who discover a thirst for life they did not know they had.

Where Have We Been?